The BQ State Championships is the premier representative basketball competition available to junior players in Queensland, with the series of tournaments taking place from January to July each year.

Entry nominations are open to all BQ affiliated associations who have competed in the BQJBC, CQJBC and QNJBC competitions.

Each tournament is segmented by age group (Under 12s, Under 14s, Under 16s, Under 18s) with separate events and venues for boys and girls in the Under 14 and Under 16 age groups. Teams are also designated into divisions to allow for strong competition in an even playing field.

Each tournament runs for four to five days, with BQ affiliated associations able to nominate to host an event each year.

The State Championships provides a pathway for players to develop their basketball career with the potential to be identified for entry into the BQ High Performance Program, and also is a major development activity for Queensland junior referees.

The BQ State Championships are supported by Hoop 2 Hoop.

The Vince Hickey Award goes to the overall champion association based on State Championship results.

In the award’s illustrious 30 year existence, Townsville Basketball have been crowned overall champions an impressive 10 times, while Southern Districts have held the award nine time.

Points are allocated to Associations based on the overall ranking of all teams in an age group. Points are given to an Association only for their highest ranked team per age group and gender. The number of points awarded is determined by the number of teams who competed in that Championship - for example the U12 Girls consisted of 27 teams, therefore the Division 1 winning team was awarded 27 points. 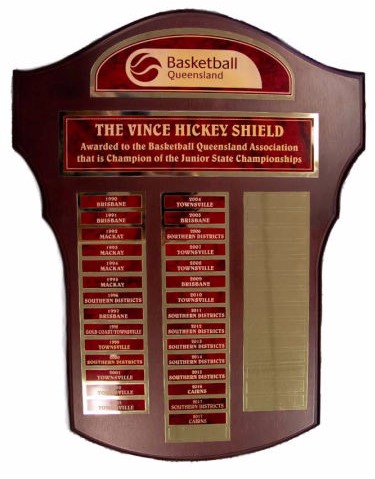