Basketball Queensland's (BQ) Coaches Weekend is back in 2020!

Our weekend-long event provides coaches from across the State the opportunity to come together over three days to learn from coaching and development experts. Coaches can register to attend one or more of our tailored coach sessions to further their development and meet like minded coaches. The weekend also doubles as an opportunity for coaches to receive their Association Coaching Accreditation.

We have over 20 coaches presentations during the our Coaches Weekend, focusing on topics to improve coach development such as the BQ Style of Play, Player Management and Defensive Containment & Disruption. Register to attend one or more of the presentations that interest you.

How to Register Guide

How to Register Guide

*more presenters to be announced shortly 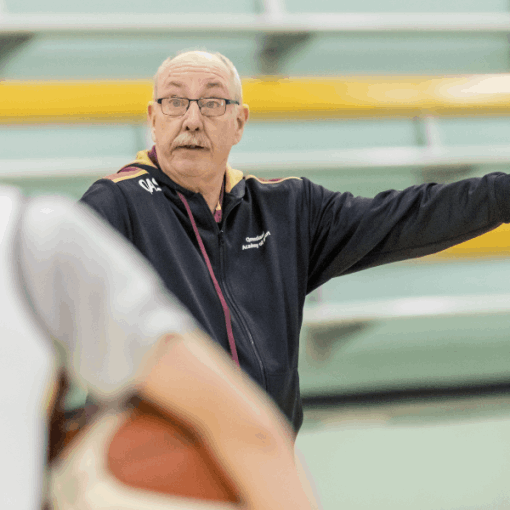 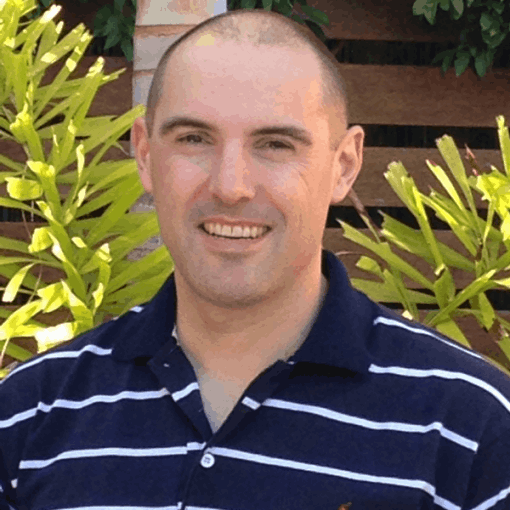 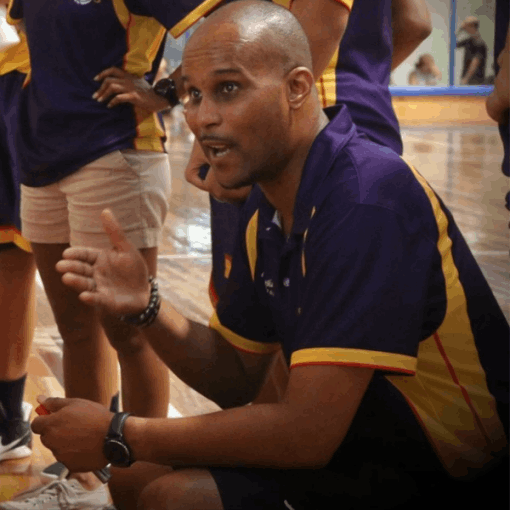 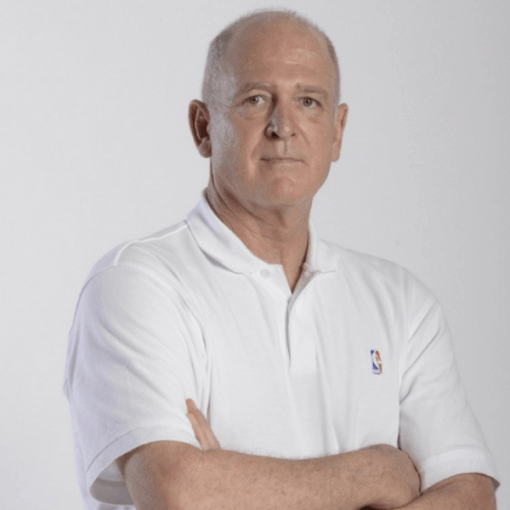 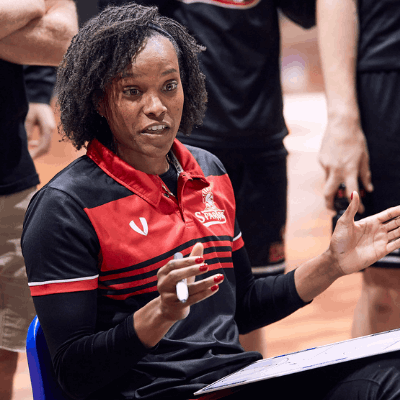 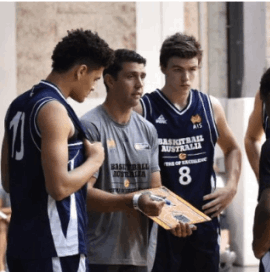 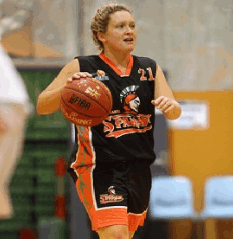 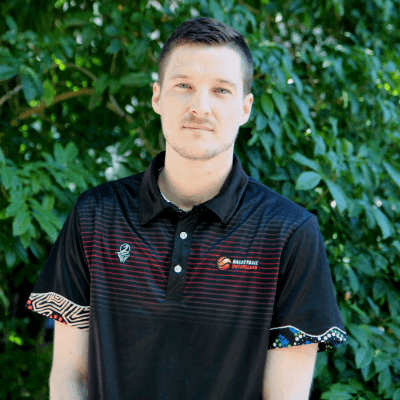 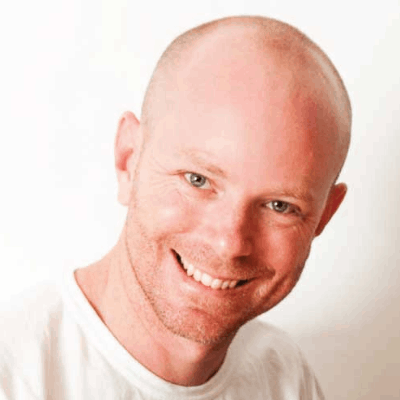 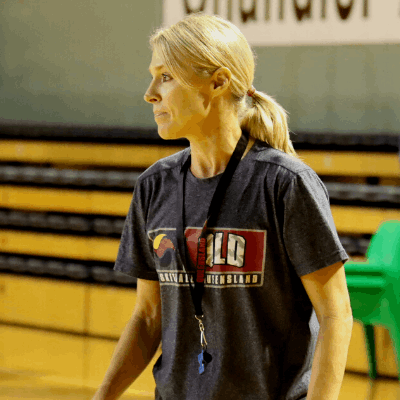 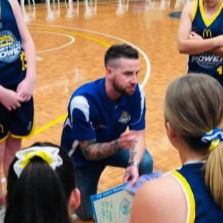 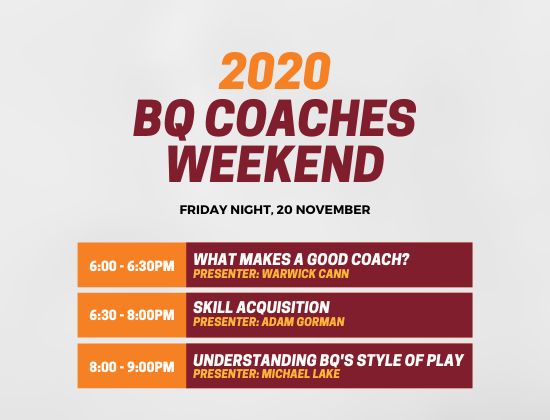 COACH LEADERSHIP - What Makes a Good Coach
What makes you a good coach? Join Basketball Queensland’s Warwick Cann as he unpacks and analyses the characteristics and attributes of a successful coach-leader in the modern game.

About Warwick Cann
Warwick Cann has coached at all levels of the game with more than 20 years’ experience in elite sport management and coaching. From spending 15 years as a State Team Head Coach in NSW, Victoria and Queensland to taking on the role of National Teams Director for British Basketball, Warwick has lead teams to medals at the Australian Junior Juniors and oversaw numerous team successes at EuroBasket.

Warwick is currently the Performance Director WNBL Champion Club JCU Townsville Fire and is the General Manager of Game Development for Basketball Queensland.

COACHING INNOVATION -  Skill Acquisition
Skill acquisition has emerged as a critical discipline area for guiding coaches on practice design and implementation. Join Adam Gorman as he highlights some key principles that coaches can use to help enhance the skills of basketball players.

About Adam Gorman
Adam has a PhD in Skill Acquisition and he is currently working as a Senior Lecturer at the Queensland University of Technology. He has two decades of experience working in the fields of teaching and skill acquisition. Adam worked for 10 years as a skill acquisition specialist at the Australian Institute of Sport (AIS) where he worked with a range of sports including basketball, swimming, volleyball, water polo, netball, athletics, and rowing.

His primary role was to work with coaches, athletes, and sports scientists to maximise skill learning and performance. Adam also worked for four years as a physical education teacher in Australian and British secondary schools. Adam’s research into skill acquisition includes areas such as expert perceptual skills (e.g., decision-making), scaling of equipment in junior sport, and investigating the effects of a defender in basketball shooting.

COACH LEADERSHIP -  Understanding BQ's Style of Play
Every coach needs a philosophy, and BQ has a clear focus on what and how to play, including coaching youth athletes to reach their optimal level. Join Michael Lake as he  discusses and introduces the BQ Style of Play as the key coaching framework for coaches in Queensland.

INNOVATIVE COACHING - How Tech Improves Coaching
Join Michael Lake as he talks through how technology can support coaches at any level of the game.

COACH LEADERSHIP - Season Planning & Periodisation
Join Steve Edwards as he guides you on what coaches should do in the lead up to a season, how to set standards and expectations and team roles.

About Steve Edwards
Steve has an extensive resume of coaching appointments at both Junior and Senior level including coaching at the Under 14 National Club Championships and Under 16 Australian Championships -obtaining two Silver medals and a fourth placing.

Steve has been assistant coach as the Lady Spartans won two SEABL Championships and has been the Head Coach in Southern Cup teams which have won a Championship in 2005 (Women) and Runner -up in 2011 (Men).

COACHING MINDFULLY - Psychology of Coaching: DISC Profiling
Join Bo Hanson has he delves into DISC Profiling, to help coaches understand who they are coaching and how players impact and interact with each other.

COACHING MINDFULLY - Achieving on Court Collaboration & Understanding
How do you get your players to stop thinking about 'me' and starting working towards 'we'? Join Bo Hanson as he looks at ways to encourage collaboration on the court and achieving team understanding.

About Bo Hanson
Bo Hanson, has been working within sport and the business sector for over 20 years, delivering leadership, management and coach development.

In addition to his own athletic career, comprising of four Olympics and including three Olympic medals, he has worked for many years with coaches and athletes from over 40 different sports, and various countries.

COACHING TECHNICALLY - Athletic Development & Injury Prevention
Hear from QAS physio Hudson Graham as he discusses how to best support your athletes’ development and get the most out of their body.

About Hudson Graham
Hudson graduated from the University of Queensland in 2004, He immediately established himself in solo private practice to enable his love of treating athletes. Simultaneously he worked in a private practice attached to the Wesley hospital. This developed his skills in acute orthopaedic management, aquatic physiotherapy and neurologic rehabilitation, and even to the management of elite equine athletes.

These skills have given him a reputation that demands interest from athletes both internationally and domestically. He has been involved in the management of athletes going to Olympic Games, Commonwealth Games and World Championship levels in a range of sports. Hudson was a founding member of the Movement Improvement Mining team, with the commencement of onsite services at BMA in the Bowen Basin.

The program pioneered by the Movement Improvement team brought about a 70% reduction in the total severity injury rate for BMA, through the provision of a comprehensive multifaceted approach that included proactive educational sessions and onsite treatment for all members of staff. Hudson is currently engaged by the Queensland Academy of Sport to provide physiotherapy services to a select group of elite triathletes. This group has the lowest overuse injury rates in the sport.

COACH LEADERSHIP: Fundamentals of Training/Game Planning and Review
What you should be doing before your team hits the court, and how do you prepare for the unexpected throughout a season? Bruce Palmer walks through how to plan for training sessions and games and provides tips on how to review and analyse season performance.

COACH LEADERSHIP: Optimising Player Management - Roles & Rotations
One of the key skills great coaches possess is knowing how to deal with player expectations and roles throughout the course of a season. Join Bruce Palmer as he discusses his key tips to get the best out of your players.

About Bruce Palmer
Bruce has an extensive basketball resume, from his playing days through to being one of the most well known coaches in the NBL. The former NBL Coach of the Year coached in the NBL for 11 years, including a Championship year with the North Melbourne Giants in 1989. He lead the Australian U22 Men to a Gold Medal in 1997 and is a four-time coach of Australian National Teams.

Bruce was the Director of Coaching at Knox Basketball Association before moving to Japan as the Head Coach of Tochigi Brex in the JBL in 2010. From there, Bruce became the Technical Director of Dongguan Basketball School in China, an NBA China Training Centre from 2012 to 2017.

ABOUT LUKE CANN
Luke is the current State Performance Manager and the 2018 QBL Men's Coach of the Year. Luke is also a silver medal winning coach at the Australian National Championships.

COACHING TECHNICALLY: Technique - Key Footwork & Movement
Join Aja Parham-Ammar as she breaks down key basketball movements from how players can use their body to protect the ball to key footwork on and off the ball.

ABOUT AJA PARHAM-AMMAR
Aja is a former professional basketball player with an impressive resume, having played in the WNBA, Europe and the WNBL before making a moving into coaching.

She commenced her career in Div 1 of the NCAA at Boston College, before joining Seattle Storm in the WNBA and securing numerous contracts throughout a seven-year European career prior to her move to Australia. As a player, Aja has been a part of the Lady Spartans team QBL ‘Three-Peat’ success in 2017, 2018 and 2019.

COACHING TACTICALLY- Creating an Offensive Philosophy
We know space is important, but how do we best facilitate good spacing and then take advantage? Join Adam Caporn has he takes you through building an offensive philosophy and strategies to progress from the half court game to transition offence.

About Adam Caporn
Adam is a Boomers’ Assistant Coach and Head Coach of the Men’s CoE Program and has been at the CoE since 2014.

COACHING TACTICALLY - Creating through Pick and Roll
Join Sarah Graham as she breaks down how to create an advantage and scoring opportunities through the use of side and middle pick and roll.

About Sarah Graham
Former Southern Districts Junior and Queensland South representative Sarah Graham played 13 seasons in the WNBL and won the WNBL Championship in 2016 with the Sydney Flames. Sarah starting coaching while still playing, balancing the Head Coach position at Hornsby Women ABA as well as being the NSWIS Wheelchair Basketball Head Coach for both the Men's and Women's program.

Sarah is currently an Assistant Coach of the Women's CoE program.

COACHING TECHNICALLY - Effective One-On-One Defensive Skills
"How can I really stop my opponent? Or should I just contain them?" Following the one-on-one offensive session, Brady flips the perspective and shows you ways to effectively coach individual defensive skills.

COACHING TACTICALLY- Why do we Tag-Up in Transition Defense
Explore BQ's tag-up philosophy and how it can help your team earn more possessions while disrupting opposition teams.

About Jackie Brown
Jackie lead the U18 Queensland South State Team to a silver medal at the Australian Junior Championships in 2019 and has been reappointed as Head Coach in 2021. Jackie is also the current Australian U17 Women's Assistant Coach and Head Coach of the North Gold Coast Seahawks U21 Women.

COACHING TACTICALLY - Overseas Trends - Europe, USA & The International Game
Adam Caporn joins us once more and takes us through current international trends, how they relate to youth basketball, and you as a coach in Queensland.

About Adam Caporn
Adam is a Boomers’ Assistant Coach and Head Coach of the Men’s CoE Program and has been at the CoE since 2014.

COACHING MINDFULLY - Helping Athletes Learn through Training
Question why we coach a drill, instead of focusing on what the drill is. Join Warwick Cann as he focuses on how athletes learn through training and how to design drills to facilitate maximum development.

About Warwick Cann
Warwick Cann has coached at all levels of the game with more than 20 years’ experience in elite sport management and coaching. From spending 15 years as a State Team Head Coach in NSW, Victoria and Queensland to taking on the role of National Teams Director for British Basketball, Warwick has lead teams to medals at the Australian Junior Juniors and oversaw numerous team successes at EuroBasket.

Warwick is currently the Performance Director WNBL Champion Club JCU Townsville Fire and is the General Manager of Game Development for Basketball Queensland.